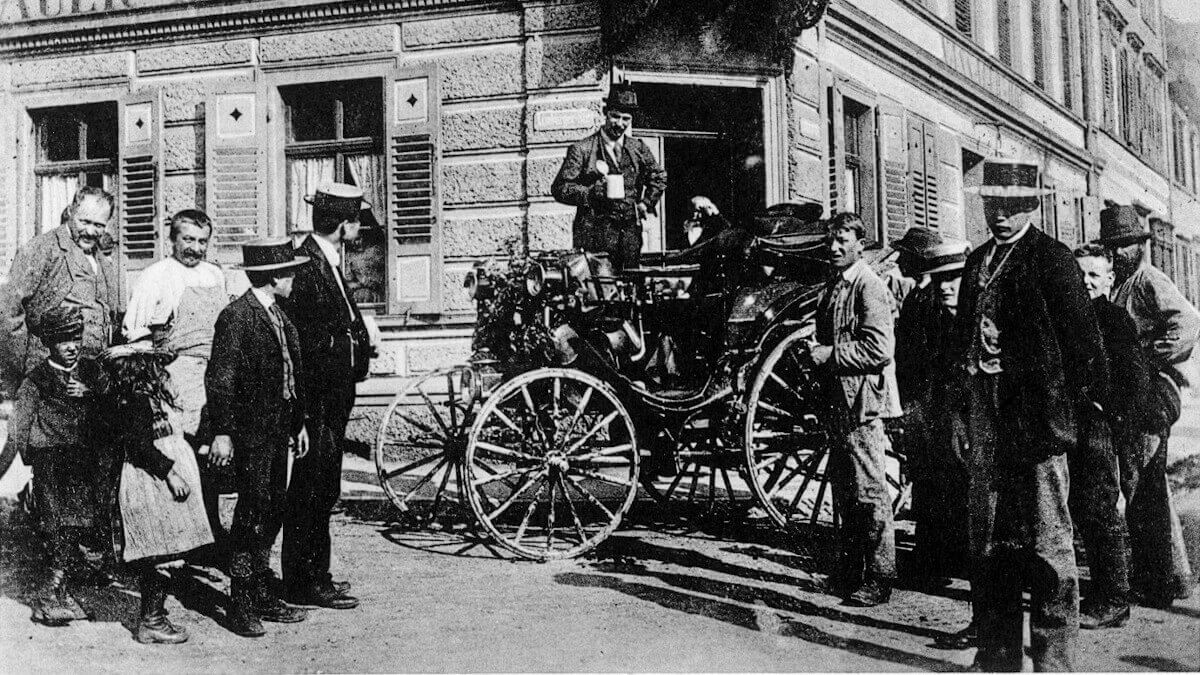 Nowadays, long-distance travel by car, especially in the summer and winter holidays, is just as normal as long journeys on business trips. The fact that this wasn’t taken for granted a few decades ago and that the world’s first provable long-distance journey generally only took place 125 years ago is probably hard to imagine today’s motorists. It is all too easy to get behind the wheel and ‘just’ drive from Flensburg to Munich or from Berlin to Paris. In 1894, less than a decade after Carl Benz patented the automobile, things were different. Only the top thousand could afford their own car – if they wanted one at all. In most cases, the vehicles then served to transport the family from the house of residence to the church or to the city, rarely for longer distances.

Baron Theodor von Liebieg, a young industrialist, was one of Benz’s first customers and had purchased a Victoria. Obviously he even detuned the Grand Duke of Baden, since von Liebieg had ordered earlier then him and thus also received his car with serial number 76 a bit earlier. This order was placed in October 1893, when Carl Benz was actually expecting the Grand Duke in his factory, but shortly before the visit of the sovereign the young von Liebieg stood in his factory surprisingly, asked Benz various questions about the first ever car with steering knuckle and finally asked for a test drive. Just before the Grand Duke finally arrived, Liebieg rolled back into the factory, signed a purchase contract and paid a deposit of 1,500 Marks, about one third of the purchase price. He then travelled back to his home town Reichenberg, today Liberec in Czech Republic. Benz delivered the ordered Victoria with its 2.2 kW/3 hp single-cylinder engine by rail to Reichenberg the following spring and also sent his master driver Thum there to teach von Liebieg all the functions of the car. 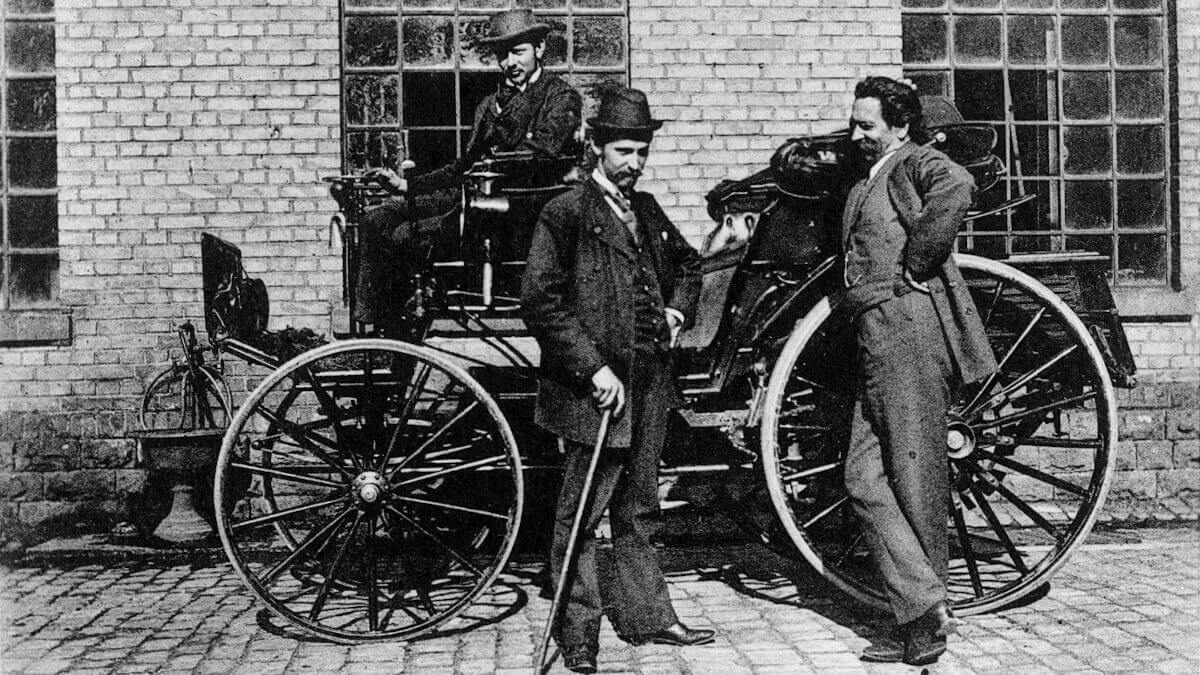 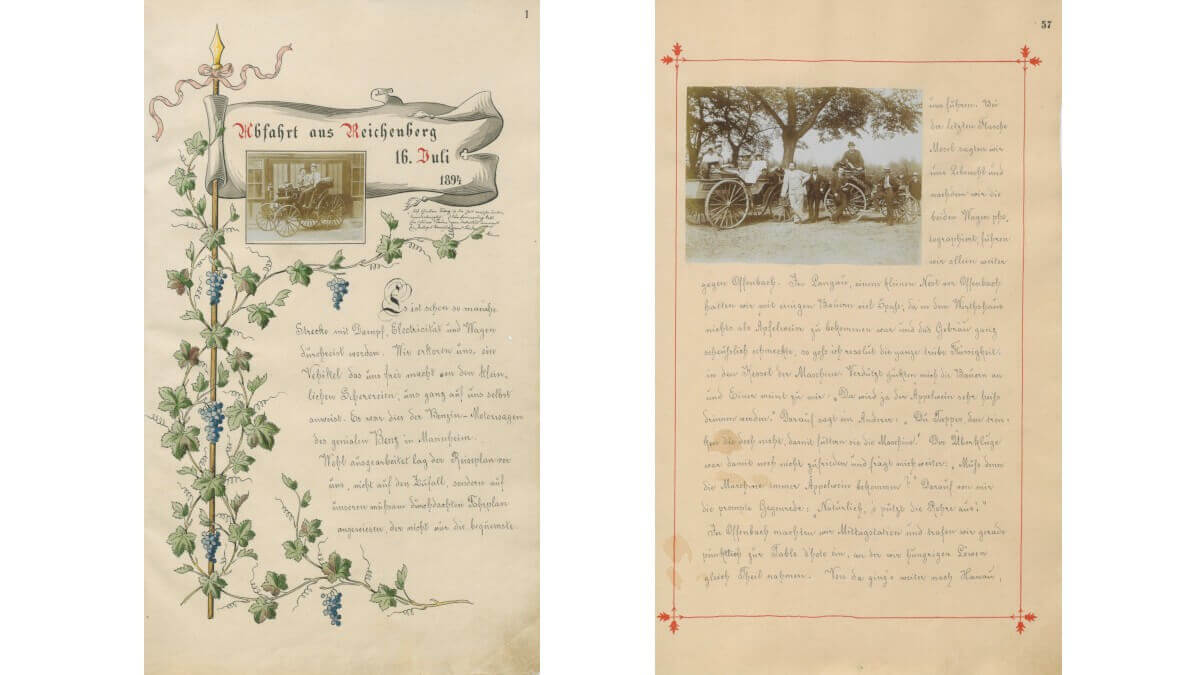 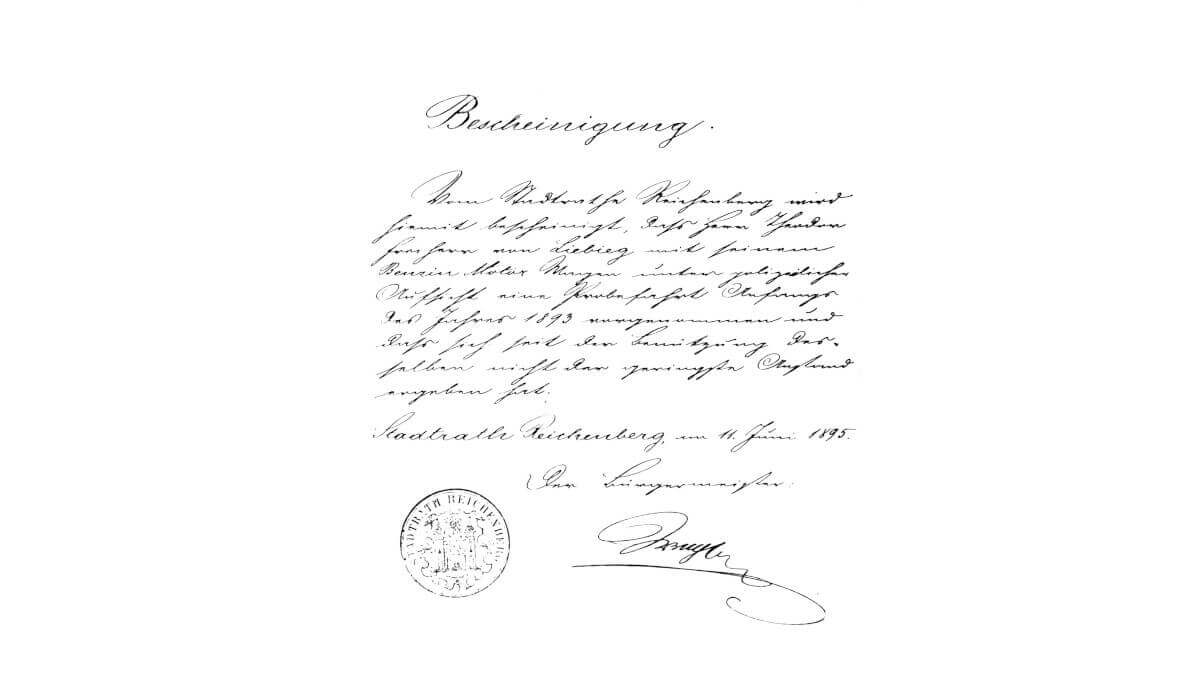 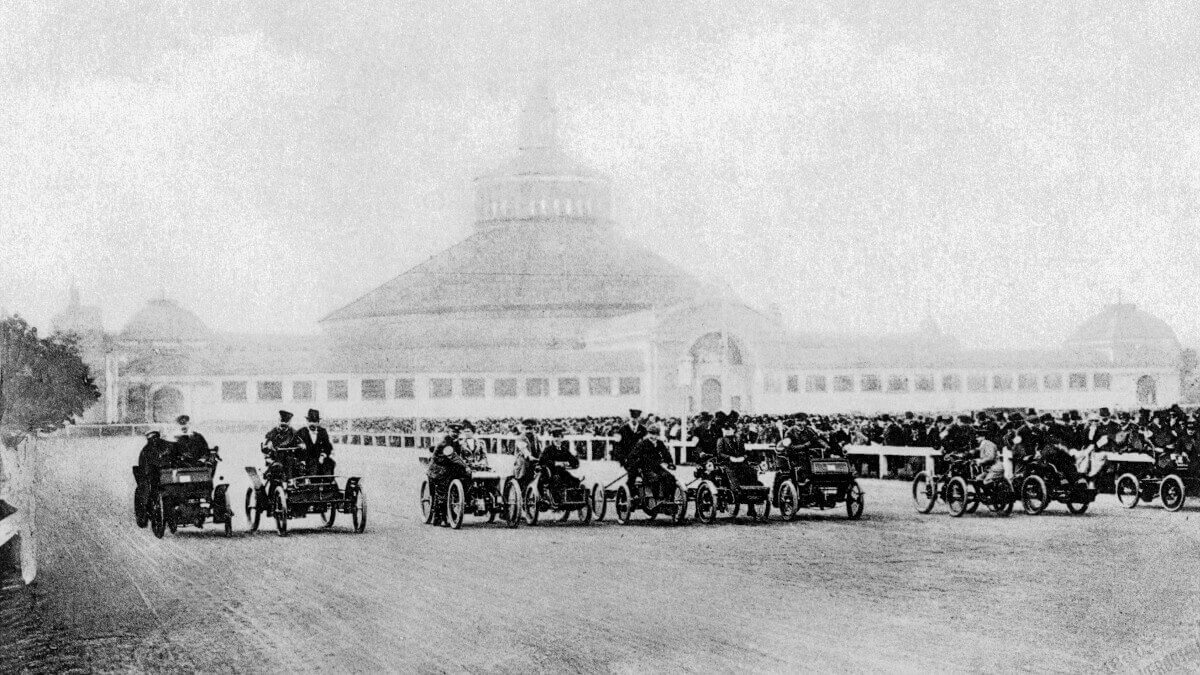 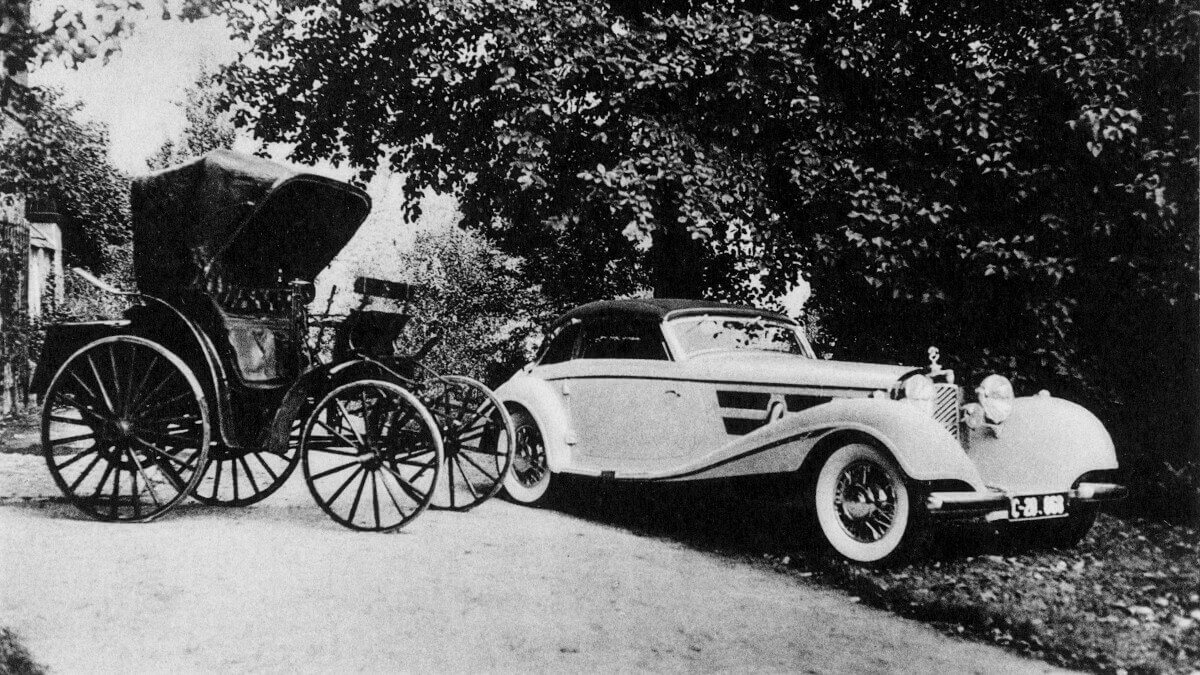 Von Liebig, just 21 years old, was a quite adventurous person. For the summer of 1894, he planned a long-distance trip from his native Bohemia to his mother’s house in Gondorf on the Moselle, visiting Carl Benz’s workshop in Mannheim. Such a journey had “been my ideal since the days of high school”, the Baron wrote retrospect in his illustrated travel chronicle, from which we show two pages in our picture gallery. He undertook the planning and previous test drives together with his friend, the doctor Franz Stransky. They quickly became confident that the Benz Victoria would make the trip despite the then still very poor condition of the main roads, the difficult fuel supply and the high cooling water consumption. On 16 July 1894 the tour started via Bautzen to Dresden, one day later to Eisenberg and on 18 July finally via Jena, Weimar, Erfurt and Gotha to Eisenach. A two-day trip followed, without an overnight stop, via Fulda, Offenbach, Frankfurt and Darmstadt, to arrive at Carl Benz in Mannheim after 26 hours. After this visit we went north along the Rhine for two days until we reached Gondorf on July 22. In total, the journey lasted 69 hours over 939 kilometers, resulting in an average speed of 13.6 kph. The journey was completed in the afternoon. The fuel was bought at drugstores and pharmacies, similar to what Bertha Benz had done on her journey from Mannheim to Pforzheim.

In the travel chronicle for the first day the following entry stands to read: “Some journeys have been done with steam, electricity and coaches. We chose a vehicle that would free us from the petty hassle of directing us to ourselves. It was the petrol motorcar of the brilliant Benz in Mannheim. Well worked out the travel plan lay before us, not on chance, but on our laboriously thought out timetable dependent…” In the further course of the journey von Liebieg noted: “At the last bottle of Mosel (wine) we said goodbye to each other and after we photographed the two cars, we drove alone further against Offenbach. In Langau, a small village near Offenbach we had a lot of fun with some farmers; since in the tavern nothing but apple wine was to be got and the brew tasted quite terribly, I poured resolutely the whole turbid liquid into the kettle of the machine. The farmers looked at me in amazement and one of them said to me: “It’s gonna make the apple wine very hot in there”. Then another said: “Tappes, they won’t drink it, they’ll feed the machine with it”. The overwise man wasn’t satisfied with that yet and continues to ask me: “Does the machine always have to get apple wine?” Then I promptly countered: “Of course, it’s cleaning the pipes”.” Besides the spirit of adventure, the young Baron also had a good portion of humor. Including the round trips he made on the Moselle during his four-week vacation and the return trip, he, his friend Franz Stransky and the Benz Victoria covered about 2,500 kilometers relatively problem-free during that summer. On his way home, von Liebieg stayed in Mannheim a bit longer and had the car serviced by Benz. The average consumption was about 21 liters of Ligroin (petrol precursor) and about 150 liters of water per 100 kilometers. This high water consumption resulted from the open evaporative cooling of the engine. Von Liebieg undertook further long-distance journeys and in 1899 took first place at the first Austrian International Race in Vienna with a Benz 8 PS. He then took a stake in the Nesseldorfer Wagenbau-Fabriks-Gesellschaft, which merged with Ringhoffer to form Tatra in 1923. He remained loyal to the Benz brand and the later Mercedes-Benz brand throughout his life as a customer. His final vehicle before his death in 1939 was a Mercedes-Benz 540 K Cabriolet A.